My Google Nexus 7 is Shipped

About two day ago, we are contacted by a customer asking if our cases will have the smart cover feature, and she showed us this amazing video, which is now circulating on all gadgets and Android websites.

We immediately contacted the owner of the video, YouTube ID wwscoggin and ask him if he both polarities of the magnet can trigger the feature. As some of you may know, the auto wake/sleep function of Apple 3rd Generation new iPad can only be triggered by certain polarity of the magnet. wwscoggin is so nice that he sends us another video showing that the features works for both polarity.

We have uploaded the video to our own YouTube channel with his permission.

Thanks to user Tauxic who replied in this post on the AndroidForums.com, we know that Apple has a patent on Smart Cover.

I really like the comments from Android Police on the Apple patent on smart covers. This is from the article on Android Policy, which first published the video from wwscoggin.

“Reviewing Apple’s patent on its Smart Cover, it seems to be rather narrowly tailored in form and function for the Smart Cover and iPad mechanism specifically, and focuses more on its ability to latch onto the host device rather than turning its display off and on. There is talk of “useful functionality” being added by the cover, but based on the patent language, that seems to still fall only within Apple’s particular design and mechanism – not in general. So, it’s entirely possible (even likely) Google and ASUS’s design here isn’t sufficiently similar to infringe – but we don’t know. That’s the kind of question that only a teardown, an engineer, and a patent lawyer can fully answer.”

How will Apple respond to Google about this patent, we will wait and see. Most likely Google will pay a license fee, or maybe a secrete agreement has already been signed by Apple and Google, so all Google Nexus 7 tablet users can enjoy this great, smart, energy efficient feature.

KaysCase is now in the process of making all our folio style cases with this smart cover feature. A huge thanks to wwscoggin.

Ericsson used to be a super power in cellphone industry. When it is merged with Sony a few years ago. It looks like they are going to dominate the market. However, over the years, they are not doing too well. Sony finally decided to ditch the Ericsson brand to launch the first phone without the Ericsson brand.

KaysCase has a crystal clear case made for Sony Xperia Ion.

KaysCase does not make beautiful cases, we make cases to show and compliment your beautiful phone.

There are similarities and differences. Both cases are made of high quality eco-friendly synthetic leather, both come in three colors, black, white and hot pink and both has a snap on casing to house the phone. The differences are: texture wise, the Book has a bolder pattern than the Flipper. The size of the Book is bigger than the Flipper, which of course offers more protection. In comparison, Flipper is slimmer and easier to hold.

The Book opens side way and the Flipper opens up down. You can always fold the front cover to the back to take a call, so the cover is not in your way, but Flipper is more convenient, because you can let the front cover drop open, so you can make the call without the extra effort to fold it back.

The Book has a great feature that Flipper doesn’t have. It can be turned into a stand, so you can watch videos on the phone.

Check them out. We hope you can find the case you like. 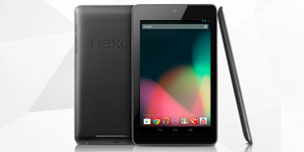 Google’s Nexus 7 is a game-changer. It is the first tablet with Android 4.1 “Jelly Bean,”. Sold for $199 for 8GB and $249 for 16GB, it’s the most bang for the buck. It’s fast, ersatile, well-built, and gives you lots of fun. It basically renders every 7-inch tablet priced at more than $300 pretty much irrelevant. If you’re looking for a small tablet to surf the Internet and play games, this is the one to buy. It easily unseats the Amazon Kindle Fire($199) for small tablets.

KaysCase started to create protection cases for Google Nexus 7 since late June, around the time Google announces the new toy. We used the most popular and best reviewed models for the new kid in town.